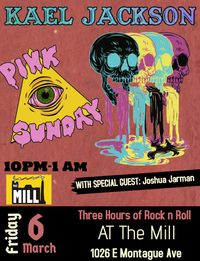 Kael Jackson : “Kael Jackson is a singer songwriter that writes original music for rebels and thinkers a like. His style has been described as a blend of psychedelic and bluesy rock and roll. His diverse influences come together to create the vintage and melodic sound that he is known for. “

Pink Eye Sunday: “Pink Eye Sunday is an alternative rock band with sounds ranging from new age punk, to classic rock and roll. The four piece band began in the South Carolina low country and released their first record, made at Return To Zero Studios, in March of 2019.”

Joshua Jarman: “Captivating. Insightful. Raw. These are a few words used to describe Joshua Jarman's songwriting and performances. With performances that each seem personal and unique, Joshua is known for engaging a crowd and gently ushering them through the pains and triumphs of human emotion... at least as he sees it. “